Kick off for my Multisport Season this year, the Rodney Coast Challenge, my first ever race, and one which I like to return to, and support as much as I can.

It is always a good honest early season test, with a tough-ish 10 Km run, a testing road bike, and Mountain bike leg totaling just under 60 Kms, and an 8 Km sprint in the kayak. Personally for me at this time of the year, I don’t have any specific training, or speed work in the bank, with my focus primarily on just getting in the base miles.

I flew up to Auckland Saturday night after work, leaving behind three weeks of miserable weather. Unfortunately Sunday in Christchurch was warm with sunny skies, but I was greeted by some of the heaviest rain day I have ever experienced! Bikes assembled at 11 PM, borrowed ski adjusted, and alarm set.

An early start, dark, wet and windy, off to Rimmers Road to drop my Scott Foil, and down to Muriwai Beach for the start gun. It was cold, so I decided I would start in my Macpac Jacket to try and stay dry for at least part of the day. Always a tough start to the run, deep soft sand, and a decent climb up over the dunes to hit the gravel forestry roads. I settled into a pace I was comfortable with Stu and Bruce slowly heading off up the road, but was confident I could do my own thing at this stage and see them later in the day.

The gap at the first transition was around 2 minutes, and I took a while to get all my nutrition stowed away, shoes and helmet on, and ditching the rain jacket. I did regret taking the Jacket off ten minutes later, it was bucketing down, thunder and lighting clapped overhead, and the wind was persistent. Again, the road bike went well for me, riding steadily, making sure I eased off for ten minutes before hitting the final climb, stay seated, keep the cadence up, then fly down the other side! I was a little surprised to not see anyone else on the ride, but there was still plenty of racing to go.

Swapping the Scott Foil for the Scott Scale, fast conditions on the mountain bike, feeling pretty good, time to really push on. Nutrition was going well, GU chomps, and gels, which have been spot on for me for a few years now. I managed to catch Stu around half way through the ride, just as he headed off the wrong fork in the road, I did yell a couple of times, but Stu seemed determined to put in some more Kms! The second half of the mountain bike is the Crux of this race, three climbs, the final one being the longest and hardest. If you have raced smart, and fueled well, you make your time up here, and I managed claw some back myself, feeling very comfortable. Flew down the now sealed final decent, managed to avoid the loose gravel, and rolled into the kayak transition.

Rasdex buoyancy aid, paddle, surf ski in the water, and off! The river was high and muddy, it was going to be a very fast paddle, not great for me trying to close a gap. Lots of flotsam to avoid, some coke to push me on for the final 30 minutes. I did have to stop and hop off at one stage, with a raft of sticks and leaves attached to my rudder, I felt much better after ditching that anchor! I spotted Bruce just before we rounded the final bend in sight of the finish. He was paddling well, all I could do was put my head down and empty the tank. Luckily I had enough to sneak past him 100 meters from the beach, and knowing I had an easier exit being that he was sitting in his kayak, and I was on top of my ski, knew I didn’t have to come up with a sprint finish and dive! 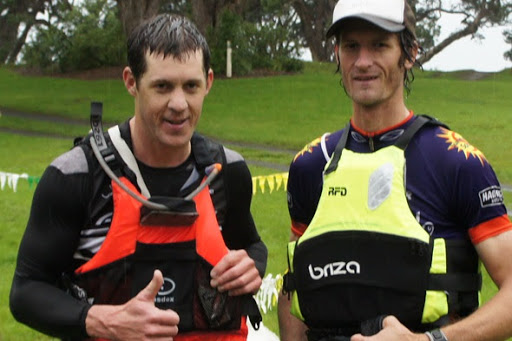 Pretty close racing, and a very sharp performance from Bruce, with Stu coming in not far behind, even after his extra handicap loop. To have someone of Stu’s caliber on the start line is pretty cool, a multiple World Multisport Champ, and someone who has won nearly every Multisport race in the country

Thanks go out to the Kaukapakapa Scout group for organising the race, and Rob for putting his hand up and sponsoring again under his Futureproof Life business

Cheers to my Family for helping out picking up and dropping off gear in the terrible weather all day!

Well done to everyone who battled through a tough day, and also thanks to all the other support crews and marshalls, legendary.

Thanks also to my sponsors, Macpac for providing great gear to deal with whatever weather is thrown at us

Avanti plus fleet cycles, always having my bikes ready to go, nothing is ever a hassle for the fellas!

GU NZ and HOKA One One NZ, Nutrition, and shoes, both keep me injury free, and energy filled

These guys are all on Facebook, check them out!